The Secret Life of Turtles: A Gili Islands Love Story

The Gili Islands in the north of Lombok in Indonesia have long been known as the “Turtle Capital of the World”. I hear you ask – why?

In the early noughties the Gilis became known as a popular tourist destination. This might have something to do with the crystal clear, turquoise waters, the white sand beaches and it’s convenient closeness to Bali. As people started to open dive shops and snorkel tours here, it became pretty obvious that the turtles had found their paradise too.
Twenty years later, people still flock to this island to see these majestic creatures. Even snorkelling off the beach in the right spot, you can spot dozens of turtles in just a few minutes.

We have many different dive sites all over the Gili Islands. Though we love them all, we have several which almost guarantee turtles – such as Turtle Heaven. Turtle Heaven consists of a large pinnacle which serves as a cleaning station. Green and Hawksbill Turtles come long distances to be cleaned by helpful fish atop the pinnacle.

The turtle life cycle is a pretty interesting one. It relies on the turtles built-in instinct system, the moon and the rotation of the earth.

In the depth of night, a heavily pregnant female turtle drags herself up the beach. She uses her fins to dig a deep hole in the damp sand. She maneuvers herself above the hole and proceeds to lay between 50 and 200 eggs.

She covers the hole with more sand and does a little dance to pack the sand down tightly, then she lumbers back down to the sea. They may be elegant in the water, but on land…
This is Mama Turtles job over. She will never see her children again, unless they end up laying eggs on the same beach in the future.

After 45-70 days, it’s time for the baby turtles to emerge from their shells. They use a temporary tooth called a caruncle to break their shell. Then, they chill out in the nest for a few days and absorb their yolk, which is attached to their abdomen.

They wait for the temperature of the sand to fall. This indicates that it’s probably nighttime and so they will be safer from predators. They all clamber out of their nest at the same time and start to run towards the sea. There are several things that encourage them to run the right way – the moonlight on the sea, the white of the surf and the downwards slope of the beach.

Once in the sea, the hatchlings will go into a swimming frenzy. Assuming they make it past the nighttime predators like sharks, they will swim until they reach the deep ocean. The natural survival rate of hatchling turtles is roughly 1 in 1000.

After their mad dash to the sea, turtles go into something called the “lost years”. The whereabouts of juvenile turtles isn’t well known. Up to 10 years later, they return to the coastal waters where they were born to find food. The survival rate for this phase of life is roughly 1 in 10.

There are many hazards of the open ocean. These include deep water predators, boat traffic, lack of food and litter. Once they reach roughly the size of a dinner plate, and can fend for themselves better, they start to head back to the coastal waters. Here, they will continue to eat (a lot!) and grow until they reach maturity. This can take up to 30 years!

So one day, a lady turtle meets a male turtle. He buys her dinner, takes her on dates and proposes with a small gift of seagrass.

Not a lot is actually known about mating patterns of sea turtles. The male attaches himself to the female by holding onto her shell with his front flippers. If shes doesn’t try to escape then she is ready to breed. Females can actually “store” the sperm of several male turtles. This is so that her eggs may have more than one father, maybe to increase genetic diversity within the population.

Once they are ready to lay their eggs, something amazing happens. The male will likely never return to his place of birth, but the female will find the exact beach she was born on to lay. Studies have shown that females will emerge from the sea within a few hundred metres of their birth place.

No one is 100% sure how they manage to do this, though it’s been at the centre of research for years. Some believe they can navigate using the earth’s magnetic field, through magnetite crystals deep in their brain. This would explain how they can navigate home after being thousands of miles away. Baby turtles have also been observed “tasting” the sand soon after emerging. This may indicate that they recognize the taste of their nesting beach.

Ah, the “Turtle Capital of the World”. What a title for the Gilis to have! We count ourselves super lucky that we not only get to dive with them every day, but we can teach others how to dive with them too. We have two different types in the Gilis – green and hawksbill.

Green turtles are the “classic” turtle. They look exactly how a turtle should look. Their shells are clean and are beautifully mottled green and brown. They are most commonly found chilling on the reef or swimming up to the surface to breathe. They are actually very lazy creatures, and as a result, they look very clean. Because they lie so still, the cleaner wrasse and remoras find it very easy to attach to them and keep their shells shiny!

We have a variety of sizes of green turtles here. The smallest are the size of a dinner plate – these are juveniles who have recently moved into the coastal waters. We also have enormous, mature adults. The biggest green turtles grow to around 1.5m long and weigh over 300kg!

Their diet actually changes as they grow. When they are juveniles out in the open ocean, they are carnivorous. They feast on fish eggs, molluscs and jellyfish. As they grow they become omnivorous, supplementing their diet with seagrass and algae from coral beds. 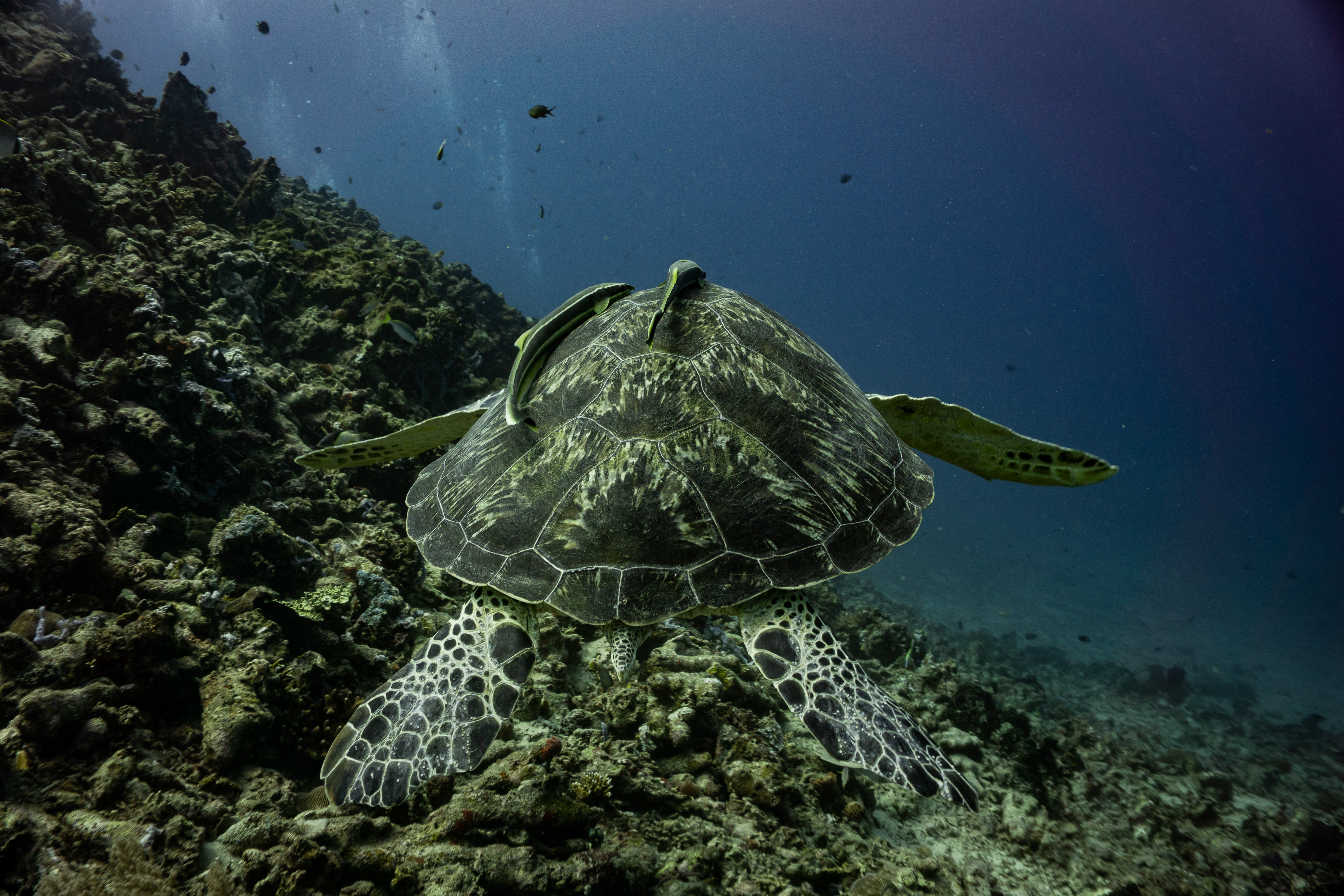 Hawksbill turtles are easy to distinguish here in the Gilis. The first difference is their activity level. While green turtles usually look like they’re sleeping, Hawksbills are always moving around! They are either swimming or (more often) eating. They are voraciously hungry animals and use their hard beak to bite at the coral.

As a result of this activity level, their shells are dirtier than green turtles. Because they are always moving, the cleaner fish never have a chance to clean them! This leaves them with shells that look “dirty” as they are covered in algae.

Their shells have also been their downfall. Under the algae, their shells are stunning. For years they were hunted and captured for tortoiseshell – in jewellery, glasses and other objects. This mean that they are considered endangered.

Fun fact! Due to their diet of certain corals, they are the only known reptile to be bioluminescent. 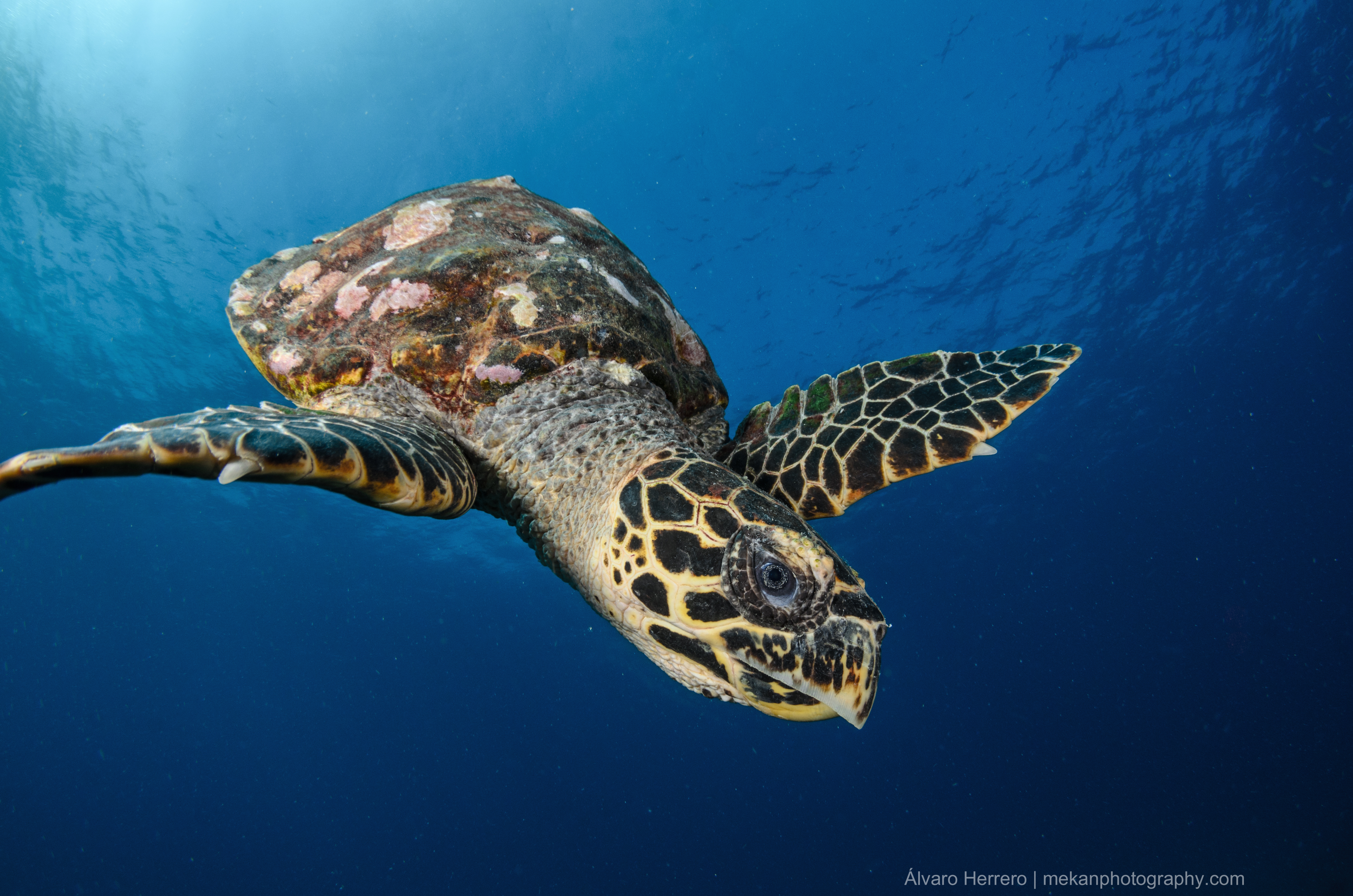 Well, the truth is – no one knows! The coral reefs around the islands are still healthy, providing food in abundance. The waters are safe and protected from the elements. Though development on the islands is high, the majority of the beaches remain untouched. This enables the turtles many safe places to nest.

The Gili Eco Trust comes to each noted nesting site and marks the area and time when it was laid. This allows the nest to be monitored and protected from poachers, predators and tourists. It also is preferable to moving the eggs as it disrupts the instincts of the hatchlings when they emerge.

How can we help?

Though turtles are common here, The Gilis are a rare case. Most species of turtle are endangered, or at least vulnerable. The reasons for the decline are widespread, but there are some things we can do to help.

Nah, no straw thanks

Plastic is a recurring theme when we’re talking about protecting the oceans. Turtles consuming plastic, or becoming entangled is a big problem. If possible, reduce plastic use and “take three for the sea”. This means, pick up three pieces of plastic every time you are in the ocean or on the beach. Of course, if you can see more – pick it up! 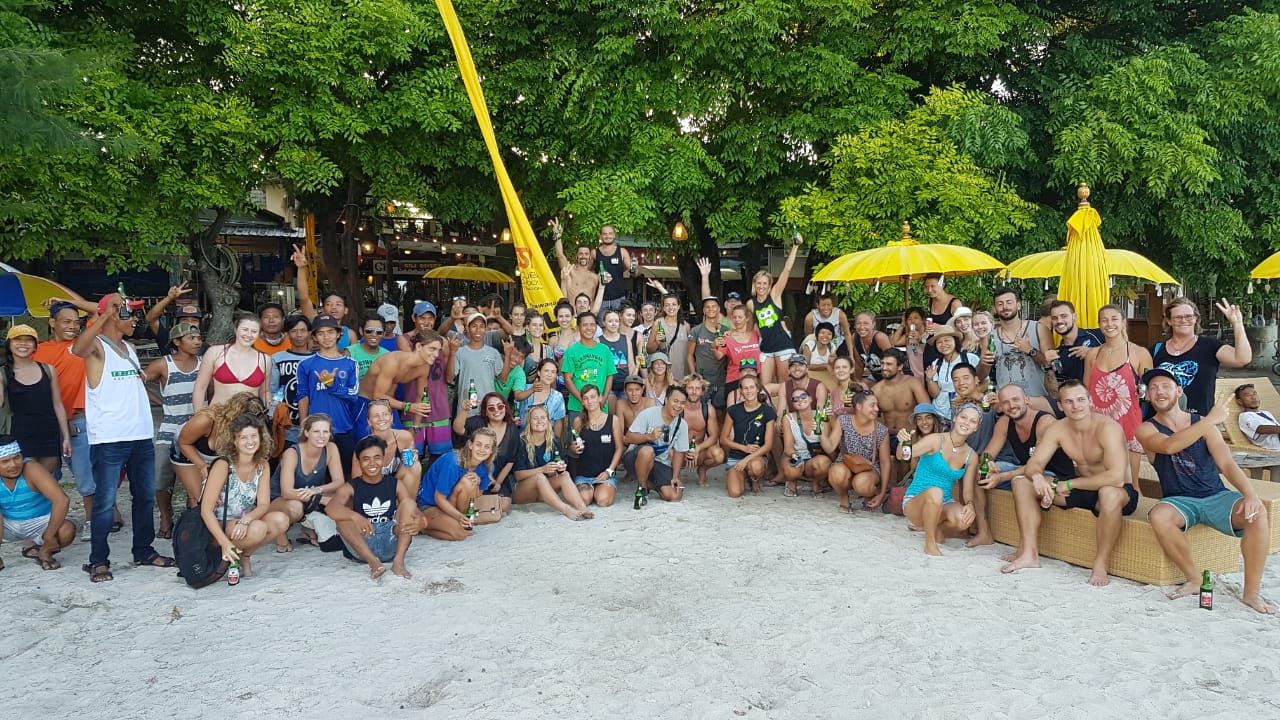 Turn that light off!

When baby turtles hatch, they use the moonlight bouncing off of the sea to orientate themselves. If the lights on the beach are too bright, they will run the other way and waste valuable energy as well as facing other hazards.

Nesting females can also be disorientated by bright lights. If you are ever lucky enough to see a turtle laying or hatchlings emerging, please do not use a torch or camera flash. This can not only disorientate the turtles but can stress the mother to the point where she decides not to lay. If she has three or so failed laying attempts, she will release her eggs into the sea and none will survive.

The sad fact is that, humans are creating much of the threats to turtle welfare. Building on beaches and the destruction of their habitats and nesting grounds. Boats causing accidents where turtles get caught in the propellers. Man made plastic and oil spills poisoning and trapping turtles. Poachers taking the eggs from the nests to sell.

But it’s not all doom and gloom! Here on Gili Trawangan we do our very best to protect these animals. We do beach clean ups and dives against debris almost every week. We protect the nests of turtles and do everything possible to help as many hatchlings reach the sea. We also ensure all of our divers on the island abide by the Gili Indah Dive Alliance and SSI guidelines to be environmentally conscious.

So, now you’ve learned so much about our turtles, when are you coming to dive with them? 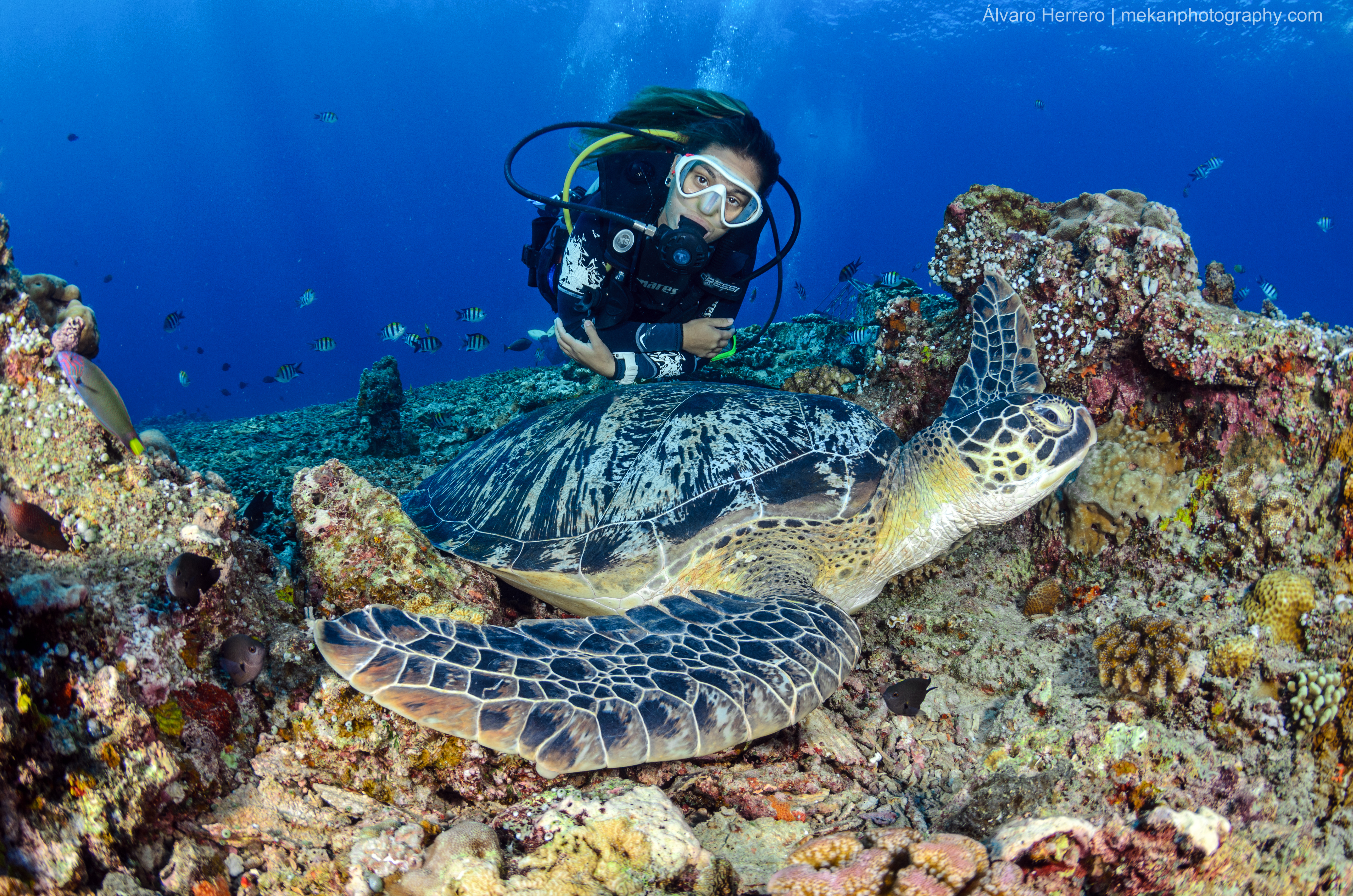